Many people shut down, wall off, block when they experience trauma. I pick at wounds, worry cuts inside of my mouth with my tongue, won’t stop touching things at they heal. I bang myself against trauma until I’m not scared of it any more. There are smarter ways to move in the world, most likely, ways that don’t lead to walking around with so much ugly car tissue, but it’s my way.

In the past few weeks since my grandmother suddenly passed away, I’ve been reading a lot of books about death and dying. Some of them have been scientific or socio-historical, examining death rituals or decomposition processes. I’ve always loved ghost stories and that obsession as returned with a terrible vengeance,  and I’ve been scaring myself deliciously at every opportunity. No matter what the genre, the weirder the story the more soothing I find it. 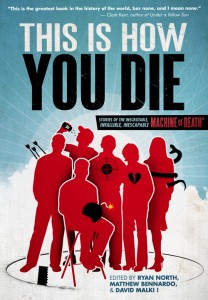 Considering all this, This Is How You Die: Stories of the Inscrutable, Infallible, Inescapable Machine of Death could not have come into my life at a more perfect moment. The collection, edited by Ryan North, Matthew Bennardo, and David Malki !, is the second compendium of stories originating from the same germ of an idea. Back in 2005, an instalment of Dinosaur Comics laid out a story premise: a machine could, via a simple blood test, determine exactly how you would die. No dates or times, or even specifics, just a single word or a short phrase. The machines seem consciously, almost cruelly vague, with a sense of humour that would rival the devil’s, manipulating any bargain to be as mean as possible. As the back copy explains, a prediction of dying of old age “could mean either dying of natural causes, or being shot by an elderly, bedridden man in a botched home invasion.”

Since the original comic appeared and put that premise out into the world, people have been writing stories based upon it. Merch has been created. Podcasts have been dedicated entirely to reading these stories aloud. In 2010, the first collection of stories, Machine of Death, edited by the same three collaborators, appeared in the world. Still the stories kept coming, and so now we have This Is How You Die.

The first collection was varied and nimbly, surprisingly, breathlessly imaginative, full of black humour and genuine emotion by turns and to different extremes. There was a general lean towards literary twists and surprise endings, but in an old-Twilight-Zone way rather than an unfortunate M-Night-Shyamalan way. Where Machine of Death used the initial premise as it’s jumping off point, This Is How You Die is standing on the shoulders of the previous collection. It is more daring, more dynamic, pushing the concept further, leading to pieces that just brush against the original idea before spiralling off into their own universe. It is dizzying and wonderful.

Each title in the collection corresponds to the output from the theoretical machine: everything from “Cancer” and “Peacefully” to “Execution by Beheading” and “Made Into A Delicious Cheeseburger.” If there is any pattern to the book, there seems to be an inverse correlation between the weirdness of the predicted death and the quiet, emotional devastation of the story. The reverse is also true: the more ordinary the apparent death, the more shocking the piece. Some of the stories even engage with this phenomenon in a conceptual way, like “Lazarus Reactor Fission Sequence,” wherein various special-ops teams are selected specifically for the type of death they’re predicted to have. “The read badass of the team is going to have something like ALZHEIMER’S. That son of a bitch can eat bullets and drink jet fuel; the universe is not letting him die until he forgets his granddaughter’s name and how to put dentures in.”

The best, most haunting story in the collection is “Blunt Force Trauma Delivered by Spouse” by Liz Argall, wherein a woman in an abusive relationship consults the machine and gets that ominous, inevitable prediction. In this story, the machines have passed out a favour, a dying fad, and it’s hard for the main character, Lara, to even track one down. When she gets her prediction, she is utterly unsurprised; she does some shopping, and goes home to her partner. “At least she knew, at least she didn’t have to pretend it was all all right.”

I devoured this book, turned the stories over and over like touchstones, like sharp little rocks and I can hold and feel dig into my palm for comfort. The tone and texture and flavour of death in each one is so different, yet they all also carry the same sense of inevitability, the copper tang of blood.