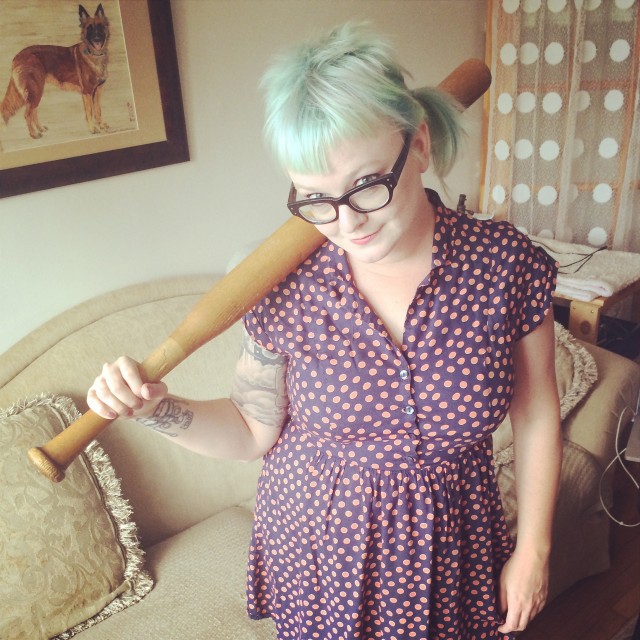 Once upon a time,  I was a much more scholarly, bookish and cripplingly anxious young woman. I planned to earn a PhD while still in my early twenties, lock myself away in the ivory tower and never come out again. After earning my Master’s degree in English Literature and Creative Writing, I suddenly found myself divorced, medicated for generalized anxiety disorder, and about to turn twenty-five.

I promptly moved to Toronto to live with my best, oldest friends and completely rebuilt, and re-wrote, my life. I fell in love with heavy metal and began writing about music. After working variously as a high school English teacher, call centre drone, writing instructor, and staff writer for an internet pornography company, I became a full-time freelance writer and spent my days alternately damaging my liver and my hearing enjoying aggressive music, or sitting hunched in front of a computer smithing words while covered in a thin layer of cheeto dust. It is a romantic existence that doesn’t require me to put on pants very often.

Then, because the universe has a sense of humour (and an extraordinary opportunity presented itself), seven years after I cut my hair and escaped the Tower, I’m about to return to academia once again. As of September 2014, I will officially be a PhD candidate at Concordia University, working on an Interdisciplinary degree in Humanities. This is a fancy way of saying that I’m getting a doctoral degree in video games, digital cultures and feminist criticism. I recently relocated from Toronto to Montreal to start my degree, which is awful because I miss my friends so much, but wonderful because there is beer at the corner store and Tortillon at every Couche-Tard.

I’m the author of two books of poetry: DOOM: Love Poems for Supervillains (Insomniac Press, 2012) and Thumbscrews (Snare Books, 2007). I’m currently woking on a novel dedicated to the plight of hench-people, the downtrodden and often expendable employees of fictional villains. I also write non-fiction essays and am constantly poking away at a magic-realist autobiography. My creative work has recently appeared in the anthology of Rob Ford fan fiction  Everything Is Fine, Little Brother Magazine, Toronto Poetry Vendors and Joyland.

I’m an active and passionate member of CWILA (Canadian Women in the Literary Arts), a wonderful organization that “raises public awareness about issues of gender, race, and sexuality in Canadian literary culture by supporting our annual count of literary reviews,” and I’m partially responsible for the vast and tangled conversation that led to it being founded. Just like the Vida count in the U.S., CWILA keeps track of the number of books by women reviewed in major publications in Canada, as well as the number of women whose criticism is published in those same publications. They also employ a critic-in-residence and add immensely to the critical discussion of literature in Canada. I am also a member of the advisory board of Meat Locker Editions, “a not-for-profit arts organization dedicated to providing opportunities for underrepresented voices in the literary arts: writers aged 18-35, with particular focus on women in the same age bracket.” Both are wonderful organizations worthy of your attention and support.

I write, talk and post obsessively about heavy metal and other difficult music, video games, comic books, CanLit, experimental poetry, speculative fiction and horror, feminism, combat sports, role-playing games, BDSM, body modification, gastroporn, fan fiction, medical science, fairytales and magic.  I’m also the Wordsmith and Promotions Wizard behind Golden Spruce Entertainment. Like Schmendrick the Magician, I am older than I look, and have trouble with time. For a brief time in my teens, I was a moderately successful competitive eater. I live with three bizarre rescue cats in an apartment building that seems to be inhabited exclusively by fictional characters. Allergic to feelings.

8 Responses to “About Me”